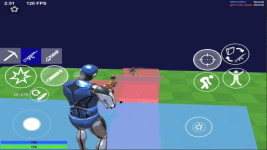 The 1v1 LOL online game is a third-person shooter that is played from a third-person perspective and has interesting building elements. You can influence the outcome of the battle by building structures, just like in the popular game Fortnite, where you build things to defend yourself. In games with a Battle Royale mode, the winner is the only player left alive to the end. The goal of this game is to eliminate all other players and become the only player left. You also have the ability to place pedestals to aid you in combat. 1v1.LOL boasts a ton of exciting features, such as private battles with friends, a bustling item shop with personalized gear, efficient training modes, and lots of different ways to customize your character and gameplay. Join now!

Using as many weapons and building materials at your disposal, build walls and ramps that can help you defend yourself against opponents or give you an opportunity to attack them. Use your ax effectively to pull up structures erected by your opponents.