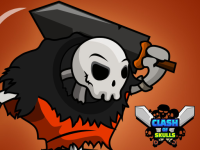 About Clash of Skulls

Clash of Skulls is a tower defense game where the goal is to prevent enemies from destroying your base by deploying an army of various skulls. Deploying skulls with the intention of destroying the enemy base is the goal. Experiment with different combinations of units to create a powerful strike force. The most effective strategy to win a war is to choose the right unit at the right time. Raise the level of your army to raise its harm. Start planning your attacks so you can gain control of your opponent's area. Skeleton warriors are equipped with a variety of weapons, including knives, spears, scythes, explosives, daggers and many more weapons available for rent. Join to test the newness of the game!

To place units, you must click on the cards.