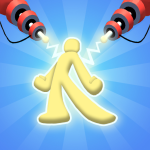 Heroes Inc is an intense and dramatic attack and fighting game. When the army's technology is fully developed, there will be no need for human soldiers. Warriors can be manufactured simply, or they can be produced through the technological integration of a variety of materials. This style of play is the inspiration behind the creation of this video game, in which you will lead an army of heroic warriors into battle and eliminate a slew of oddly shaped enemies. way. You need to build your laboratory, experiment  to create new superpowers, and build your hero alliance to face the evil army of robots attacking. The battles will be epic, the enemies endless, and your heroes the greatest in the world! There are hundreds of powers to explore. Let's download the game and discover it now!

You can click or tap the screen to control the character and create the greatest heroes in history and save the world!