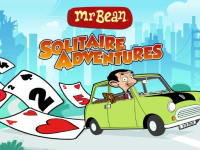 Mr. Bean Solitaire Adventures is a super fun solitaire card adventure game. In this game, Mr. Bean was experimenting with taking a selfie atop Tower Bridge in London, but crashed from the bridge and collided with a ship, located in the United States! When he opened his eyes, he found himself in New York, and his solitary adventure began. Join him on a trip through the United States and experience the thrill of cities like New York, Honolulu, San Francisco, New Orleans, and more in this solitaire card game.

How to play Mr.Bean Solitaire Adventures

Click on Mr.Bean and follow the respective directions to move. With his skateboard, Mr. Bean will slide straight across the street sidewalk, avoiding obstacles such as trash cans, rocks and the sudden appearance of the owner and the annoying cat. You need to hurry and help Mr.Bean move, otherwise the game will be stopped.