Pirates Path of the Buccaneer
1 55 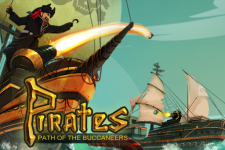 About Pirates Path of the Buccaneer

In the action game Pirates Path of the Buccaneer, the player must aim his enemies with cannonballs and be ready to shoot at them. Cannons, sea monsters and pirate ships are just some of the things you might encounter during your journey. When you detect ships in the area, you must act quickly and be ready to attack. Whoever shoots at another ship faster and more accurately deals more damage to that ship faster. The firepower of damaged ships will decrease, and for a while, they will be unable to fire their cannon. This duration will give the enemy ship a shooting advantage or give it time to leave the battle. Once you land accurate hits on the enemy ship, you can bring it down completely and send it into the waters below. You have to move forward without colliding with them to prove that you are a brave commander on the high seas. If you like strong shooting games, you can try more with our Hungry Shark Arena Horror Night, Battles Of Seas game!

Tap anywhere on the screen to move the ship. Swipe the screen while holding it to aim the cannon, then release to shoot.