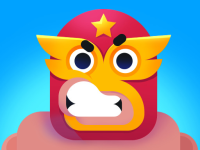 In this entertaining physics-based platformer Punch Bob, you must defend yourself against your enemies. In the blue corner is Punch Bob, who lifts the scale to a staggering 500 pounds. Maybe he doesn't sound like a hero; maybe he's a few pounds overweight; maybe he died just standing in his corner... But he's fighting for what he believes in, and that's what matters. However, despite his massive skeleton, he possesses the heart of a true warrior deep within his body! You may be wondering, "And what is his weapon?" Forget about ammo and trigger! Bob doesn't need a gun. He is the most powerful person in this regard. Join the game to discover the fun offline!

Keep tapping the screen to adjust the aim of your jump, fireball or bomb.