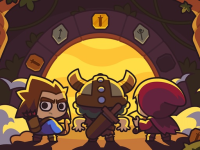 Raid Heroes: Total War is a game that collects a crack team of heroes, the goal is to assemble the strongest team of heroes possible to win the tournament by completing the story-driven raid. Danger is reappearing throughout the kingdom! The Dark Lord's army had appeared at the border, signaling an all-out conflict. Build a fortress in your town and defend it from other players. Battle in the PvP arena with your band of heroes and armies of other players to see who wins! Prepare for all-out war by forming clans! If you are looking for a free castle game with dramatic battles, look no further than the brand new Raid Heroes: Total War. You can challenge your strategic and management talents, just like a real estate tycoon or army general. This is a great combination of role-playing, strategy, idle hero and auto-battle games. Instead of just hearing about heroic wars, join them.

You need to accumulate five hero cards to enlist him. You get cards to beat the raid and defeat the city. During the raid, you can attack an opposing team by clicking on them or by using the FIGHT button.