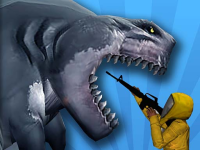 Sharkosaurus Rampage is a dramatic and dangerous breakout game. In the middle of the Redwood Forest in California is a top secret laboratory that has been buried deep underground. Scientists with a sense of humor are trying to clone a dangerous monster by combining the genetic material of sharks and dinosaurs. You will play the role of a Sharkosaurus, tasked with breaking out of the top secret laboratory while fighting members of the security service hired by the science corporation. Fight against armored vehicles, military cars, jet dudes, tanks, helicopters, all-terrain vehicles (ATVs), monster trucks, jets, and even one giant dragon monster. To prevent corporate DNA fraud, you need to smash cars, eat enemies, and destroy experimental equipment. Then consume the ammo box to get a more powerful laser weapon. To activate doors, elevators and stairs, you will need to use a variety of different mechanisms. Do you think you have the courage to run away, or will you stay in the specimen container waiting for the next DNA test? If you decide to join the fight, download the game now to enjoy it!

How to play Sharkosaurus Rampage

Use the accessibility buttons on the screen to get the character out of his hidden position immediately.