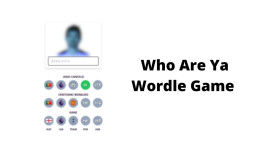 About Who Are Ya

Who Are Ya is a game that can be considered as a Wordle for football enthusiasts. In this game, the players have eight chances to correctly identify a soccer player. In Who Are Ya?, like the original game, the player has a certain number of chances to guess who the target player is (eight in this case), and each of those chances reveal something about anyone. what you guess and the target players have in common. When you first start the game, you will see a pixelated image of another player in front of you. Each of them will try to win a spot in one of the top five leagues in Europe, either the Premier League, La Liga, Serie A or Ligue. If you guessed the nationality, league, club, respectively. set, position or age of a player, the game will inform you whether your prediction is correct or not.

Use the mouse to start playing and control.